You are at:Home›Tribute to Elisabeth Limmer
By Liesbeth Sparks on March 6, 2016 Home, Latest 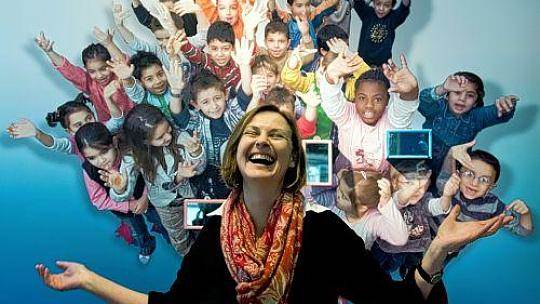 We are deeply saddened by the unexpected passing of Elisabeth Limmer earlier this year. Elisabeth was one of the brightest and most creative members of the children’s museum movement. We are so sorry that this dedicated museum professional and loving mother has left us. She had so many plans for her museum!

Elisabeth was involved in the children’s museum world for more than 20 years. She started out as a curator in the early nineties. As one of the pioneers of ZOOM Children’s Museum in Vienna, she was deeply involved in its conception.  She was especially dedicated to the realization of the young children’s area “Ocean”, which is still one of the most popular galleries at ZOOM.

Having herself been trained as an artist, it was Elisabeth’s aim to closely involve artists in children’s programming. Elisabeth developed an art atelier for Zoom’s very first exhibition. Young Viennese artists – many of them are now famous – mentored children, encouraging them to experience different materials and methods. Elisabeth’s atelier is still a love mark for many Viennese children.

In 2001 Elisabeth moved back to home country Germany with her small son Thaddeus, where she headed an interactive museum in Nürnberg. A few years later she became the director of the newly founded Museum Mondo Mio in Dortmund. She was deeply involved in projects that aimed to better integrate and include new migrants into Dortmund’s society. Mondo Mio became an important and safe place for the multicultural population of Dortmund.

At the last Hands On! Conference in Amsterdam in the fall of 2015 we all met a healthy and joyful Elisabeth, full of new ideas for her museum and for her audience. She experienced the ceremony in which the life time achievement award was given to ZOOM, to which she contributed so many creative and wonderful ideas.

She will be deeply missed by her friends and colleagues all over the world.