Dilemma-based communication is a teaching method that focuses on the involvement and reflection of the participants in a problem and dilemma presented to them. By participating and arguing for their opinions, they get a real sense of being involved and having influence on the case. In this way they also become engaged in a debate about morals, ethics, rules of the society and human considerations.

In my presentation I will tell about the theories and methods behind this kind of communication, give examples from the praxis in Den Gamle By and reflect on the experiences. 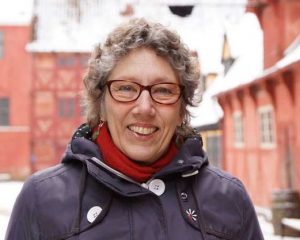 Marianne Bager was educated and has worked as a teacher in a public school on the outskirts of Aarhus for many years. Early in her career she became interested in drama, not only in teaching drama but in the way one can use drama as a learning medium. She earned a diploma in Drama from 1997-2000, which led in 2001 to a part-time job at the open air museum Den Gamle By where she started an education department. After a few years it became a full time job as head of the education team at the museum.

* HO! does not own any of the presentations or concepts presented in the video. The content presented is the intellectual property of the speakers & the institutions they represent. The ideas and views stated in this video do not necessarily represent the views of HO!. Please note that some presentations held at the conference are not included in this video due to the owners copyright policy.