The Children in Museums Award

Each year Hands On! rewards the most excellent children’s exhibition or project dedicated to children with the Children in Museums Award. The award was recently named one of Europe’s most prestigious museums awards by NEMO- The Network of European Museums Organisations.

View the winner and shortlisted nominees of 2021!

Joint venture The Children in Museums Award is a joint venture between Hands On! and the European Museum Academy. The Award was launched during the Children’s Bookfair in Bologna, Italy in 2011. The award (then children’s museums award) was established in 2011 by the European Museum Academy and Hands On! International for the recognition of excellence in the specific sector of international children’s museums. In 2014 the name of the Award was changed to the Children in Museums Award, to reflect the wider range of provision for children in today’s museums. The European Museums Academy cooperates with Hands On! supplying judges and offering expertise as regards to content. The judges are on the look-out for creative and innovative exhibitions and programmes for the age group up to 14 years old.

Innovation The judges not only value creativity and innovation, but also consider the ways in which an exhibition or programme can change the course of museum thinking or museum practice, nationally as well as internationally. How can elements of the winning exhibition or programme be incorporated into the museum field? That is why the judges pay special attention to interpretation and presentation.

The Award is judged by a panel of experts experienced in many disciplines within the museum field who all contribute their time as volunteers. The judges are looking especially for museums, exhibitions, programmes and museum environments that show:

Applications are welcomed from:

The independent jury of 10 museum experts rates each applicant on the basis of their application and supporting materials. The entries with the highes scores are selected for the annual CMA shortlist.

In a second step all shortlisted candidates are visited and assessed by two judges. In the course of a secret jury Meeting, the judges present the reports of their visits and then selects a winner. The winner is announced in the course of a festive ceremony, where all nominees are presented.

The trophy is a bronze statue of Miffy, the world-famous children’s character, which was created by Dick Bruna (1927-2017). The sculptor is Marc Bruna, Dick Bruna’s son. This (only existing) statue is a scale model of the original statue that is in Utrecht, the home town of Dick Bruna in The Netherlands. The statue was donated to the city by the Soroptimist Club of Utrecht in the 1990s. 2015 was Miffy’s 60th anniversary and yet she still appeals to children all over the world – the Miffy books are now translated in more than 50 languages. As a character, Miffy embodies the principles of creativity, fantasy, openness (she looks at you), positivity, freedom of thinking and child friendliness. Her profile as the familiar, friendly character that children worldwide recognise and love was underlined in 2004 when New York City chose Miffy as their Family Tourist Ambassador in a bid to attract tourists’ families back to the city, post 9/11. 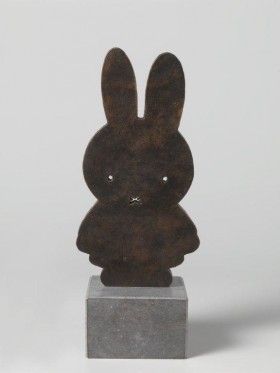 This award is brought to you by Mercis B.V.